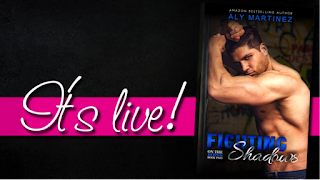 
**Each book in the series can be read as a standalone** 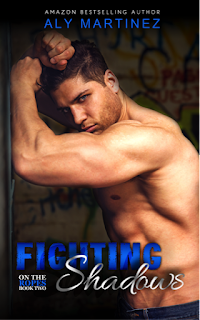 Blurb
I come from a family of fighters. I always thought I’d follow in their shadows, becoming unstoppable in the ring. That changed the day I saved the life of a woman I loved, but could never have.
My brother hailed me as a hero, and my reward was a wheelchair.
Paralyzed, my life became an inescapable nightmare.
Until I met her.
Ash Mabie had a heart-stopping smile and a laugh that numbed the rage and resentment brewing inside of me. She showed me that even the darkest night still had stars, and it didn’t matter one bit that you had to lie in the weeds to see them.
I was a jaded asshole who fell for a girl with a knack for running away. I couldn’t even walk but I would have spent a lifetime chasing her.
Now, I’m on the ropes during the toughest battles of my life.
Fighting the shadows of our past.
Fighting to reclaim my future.
Fighting for her. 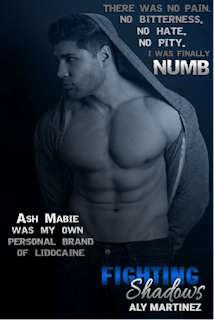 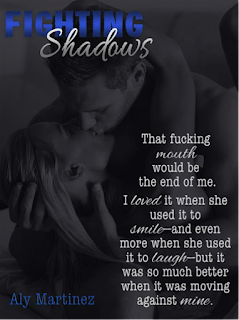 First and foremost-- I have read everything by Aly Martinez and I have loved EVERY.SINGLE.ONE! No joke. If you haven't read anything by Aly....WHERE HAVE YOU BEEN? I started with the Wrecked & Ruined series and was hooked. I loved the way Aly wrote alpha males that could make me swoon!

Fighting Silence (Book 1) is probably my favorite of Aly's. I absolutely loved Till and I immediately fell in love with Flynn & Quinn. So when I saw Flynn was getting a book I was so excited. I couldn't wait to get my hands on it.

It's not necessary to read Fighting Silence before Shadows but I HIGHLY recommend you do. I think what made this book better for me was that I was introduced to them in the first book. I think it gives a better understanding of the struggle this family goes through and how Flynn was before he was shot.

Now to the Flynn and Ash!

Obviously, I love Flynn. Till will always be my favorite but I definitely have a soft spot for Flynn.  Flynn gets shot in the back saving the life of someone he loves more than anything. When he wakes up, he is paralyzed. It's a big struggle for him to adjust to this new life.  Thankfully Ash comes in to help him heal.

"Flint, don't get so caught up on the shadows that you forget the man who casts it."

Ash made me laugh more times than not. She had a rough life as well and finding Flynn was like a breath of fresh air for her.  She was immediately drawn to him and never so him as the guy in a wheel chair. She knew the potential he had and she made sure she showed him what he was worth and making Flynn smile by telling a fantastic joke.

"You know, just to make sure we stay out of trouble. I mean, I totally understand that you're allergic to fun.  But you could always pop an antihistamine or something."

"Yeah Ash, tell me about the tattoo"
"Fuck you"
"Soon enough"

"Ash, baby, I have three years worth of frustration to work off inside you.  And that's the part where your begging becomes fun."

Basically, I loved this book! Flynn will capture your heart and Ash will just make you laugh.  You get plenty of Till & Eliza too.  These books make you fall in love with the Paige family!

Haven’t read this series yet?  Meet Flint Quarry, Till & Eliza
in Fighting Silence

About the Author:
Aly Martinez 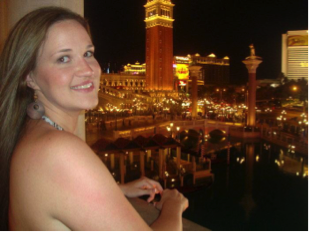 Born and raised in Savannah, Georgia, Aly Martinez is a stay-at-home mom to four crazy kids under the age of five, including a set of twins. Currently living in South Carolina, she passes what little free time she has reading anything and everything she can get her hands on, preferably with a glass of wine at her side.
After some encouragement from her friends, Aly decided to add “Author” to her ever-growing list of job titles. Five books later, she shows no signs of slowing. So grab a glass of Chardonnay, or a bottle if you’re hanging out with Aly, and join her aboard the crazy train she calls life.

Posted by For The Love Book Blog at 8:05 AM No comments: